The Great St. Bernard Pass is a historical place to visit near Verbier. It is the third highest road pass in Switzerland, at an altitude of 2.469 metres. At the top of the pass you will find the Great St. Bernard Hospice, founded in 1049. The pass is located on the main watershed that separates the basin of the Rhone from that of the Po and has a great view on the border of Switzerland and Italy.

Besides the great view the pass is known as the most ancient pass through the Western Alps, with evidence of use as far back as the Bronze Age and surviving traces of a Roman road. In 1800, Napoleon’s army used the pass to enter Italy.

A lot of people think the pass got its name from the St. Bernard dog. However, the breed of the dog is actually named after and its hospice. This is because St. Bernard dogs were used by monks in rescue operations. The earliest written records of the St. Bernard breed are from monks in 1707. The actual name of the pass comes from Bernard of Menthon, the 11th century monk who established the station.

If you wish to avoid the pass or you would like to pass through this area in winter time (the pass is closed in winter due to snow), then you can use the Great St. Bernard Tunnel which opened in 1964. Alternatively, this area is in winter great for ski touring, but make sure you hire a professional guide. 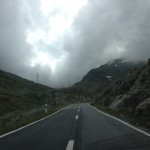 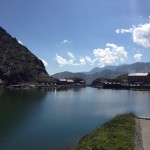 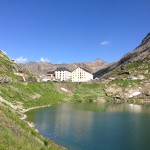 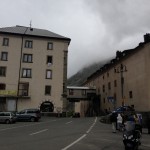