After a long and fantastic winter season Televerbier closed the ski area yesterday. Since the opening weekend on 9th November we have been able to ski and snowboard for almost 6 months and, looking up the mountain right now, we probably could have continued for another month! However most of the tourists will be turning their thoughts to summer holidays, and there is the usual lift maintenance to be done over the next few months.

It has been a great season here in the 4Vallees. November started off promising with a large amount of fresh snow, followed by a dry December month. Fingers were crossed for the Christmas and New Year holiday weeks as we didn’t have much snow at that time. However the resort was full of people and in the end everyone was able to enjoy the conditions.

January slowly improved and was followed by a powderful February. Over the half-term holiday weeks we enjoyed some of the best snow in the last few years and March 2014 was a warm and sunny month in the Val de Bagnes. Again fingers were crossed at Easter as the snow was disappearing fast but snow fell just in time and even last week we received another 40cm of fresh snow higher up which ensured the Patrouillers in the Patrouille de Glaciers event had enough snow to ski almost all the way down to Verbier.

Touring skiers are probably happy that the resort is closed now, because when we look up the mountain there is still enough snow to ski down to Carrefour. Yesterday the conditions on Mont Fort were simply amazing and lower down the slopes were all still very good down to Ruinettes. Now it is that time of year to rest and prepare for the summer. Before we realize it the resort will open again for the summer period with nice hiking trails, trottinettes and a very big Verbier Bike park for mountain bikers. Can’t wait to see you then! 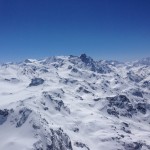